How to make stuffed fabric letters to decorate your child's room.

If you have read the "About" page of this website, you know that my first project after deciding to pick up sewing again in 2016 was a baby pillow, which was the first time I dealt with stuffing. It made me wonder what else I could do with stuffing. I was in my third trimester of pregnancy, so naturally I wanted to make something for the baby room, and I was exceptionally drawn to the idea of stuffed fabric letters.

Before I begin the handiwork, there were a few design decisions I had to make. They were:

I basically had 2 choices of font types - serif or sans serif. After viewing examples of similar projects on the internet, I found myself preferring the serif fonts, so that's what I chose. Now this was not an easy decision because I was wary about serif fonts being more complicated to sew due to the "tails" that are characteristic of serif fonts (it has proven to be not as complicated as I thought). This was the font I chose:

I did NOT create these and I wish I could give credit to the original creator but the truth is I downloaded the letters from so many different sources, as I could not find a single complete package of all 26 alphabets. I had to do quite a bit of Google image search (keywords: kindergarten, colouring, gif, bubble) until I got the complete set! But for the benefit of my readers, here are all 26 alphabets in full-size images.

Edit (17 June 2020): Thanks to one of my readers named "Bob", I now know the name of this font. It's called "Cooper Black" and is available for download here. If this link doesn't work, just Google "Cooper Black" and you will find many websites that provide the font file for download. After downloading the font, open your word processor software and type your desired text in the Cooper Blank font, and then make it printer-friendly as described in the next paragraph.

Alternatively, you could type out the letters in your preferred font in Microsoft Office and adjust the text settings as what I did in my fabric alphabets post to make it printer-friendly. If you are going to cut the letters out using a cutting machine, you may want to convert it to SVG file.

I printed the letters in A4 and A3 papers and laid them out on the bed in the soon-to-be baby room to see which one looked better.

Font printouts in A4 and A3 papers to test their proportion to the room.

I went with A4 for two reasons. First, I initially intended for the letters to be hung on the wall or on the window so they cannot be too big or heavy. Second, A4 simply looked a lot more manageable to sew.

I was spoilt for choice when it came to fabrics! We had not decided on a colour scheme or theme for the baby room, so I had a lot of room for flexibility. In the end, I chose this safari-themed poplin from Spotlight for the front of the letters and a plain off-white cotton for the back:

Fabric choice for the stuffed letters: A safari-themed cotton poplin from Spotlight and an off-white cotton fabric from a local fabric retailer.

Poplin is a suitable material because the stuffed letters would not be washed often or at all. So, durability of the fabric is not that important.

Nevertheless, I have used iron-on intermediate interfacing on the poplin so the resulting stuffed letters could hold their shapes better.

Fun Tip! You could also use scraps, where each letter is made of a different fabric. There are so many possibilities for fabrics and colours combinations!

In the end, I decided to simply display the letters on a shelf instead of hanging them, so I didn't need to sew any hoops or tabs on them.

Note: If you plan to hang them, they should not be heavy, so go easy on the stuffing.

The process was quite intuitive save for a few tricky situations, which this tutorial below will cover. I did not have a sewing machine at the time I was making this, so this project was entirely hand-sewn.

A sewing machine would have tremendously sped up this project and I would have definitely used a machine if I had one. But having said that, I realised hand-sewing actually made my letters turn out really neat and precise.

Cut front fabric, interfacing, and back fabric into equal-sized rectangles that fit an entire letter cut-out plus clearance of at least 2cm all around.

Iron fusible interfacing (intermediate thickness) onto the wrong side of the front fabric. Then, baste or pin the front and back fabrics right sides together.

Trace MIRROR IMAGE of the letter (black lines) onto the interfaced wrong side of the front fabric. Then, draw a 1.5 cm seam allowance line (red lines) all around.

Cut along seam allowance lines (red lines), through all those basted/pinned layers.

Opening should be strategically located to facilitate easier turning of the fabric inside out.

Snip any corners and notch any curved sections of the seam allowance, close to but NEVER reaching the seam lines.

Note: Snip only just enough notches to create the curved seam (in my case, about one notch every inch), because this seam is going to be hand-sewn close, and the less notches there are, the easier it will be to manipulate the seam allowance later.

STEP 7: TURN FABRICS INSIDE OUT

Turn the fabrics inside out through the unsewn opening, to reveal the right sides of the fabrics. The images below show how the front and back of the letter should look like after turning inside out, with the unsewn seams poking out.

Fold in the unsewed seam allowance, between the fabric layers, along the letter’s outline. Then, give it a good press of the iron. This step will help make the next and last steps immensely easier.

STEP 9 (SKIP IF LETTER HAS NO HOLE): PARTIALLY CLOSE SEAM AT HOLE

For letters with holes, slip stitch close (by hand) the seams at the hole leaving an opening just large enough for inserting stuffing.

Note: Alternatively, you may do this by overstitching with a sewing machine very close to the edge - a much quicker method that yields a less polished result.

Stuff the letter with your preferred stuffing through the remaining opening (I used polyfiber). How much to stuff depends on your liking. I wanted them really sturdy so they don't droop, so I stuffed densely. If you intend for this to be a cushion, for example, you might want to make it softer and stuff less densely.

Slip stitch close the remaining opening.
Seam at the hole of the letter "O" sewn close with slip stitches.

Now, repeat until you have the complete set of letters! 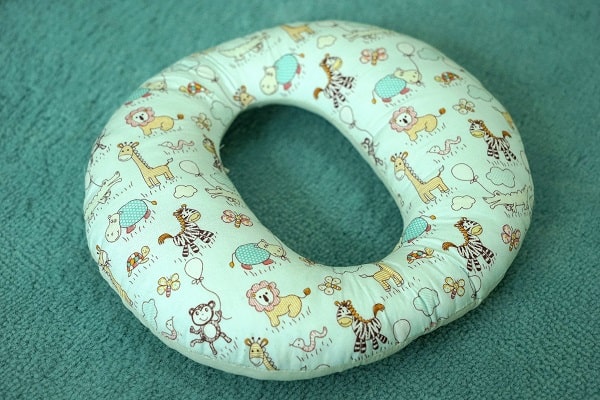 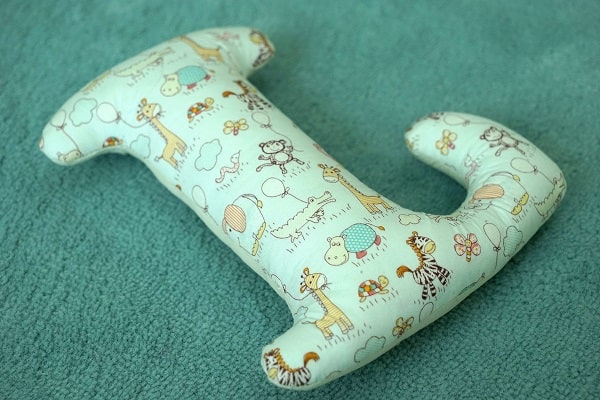 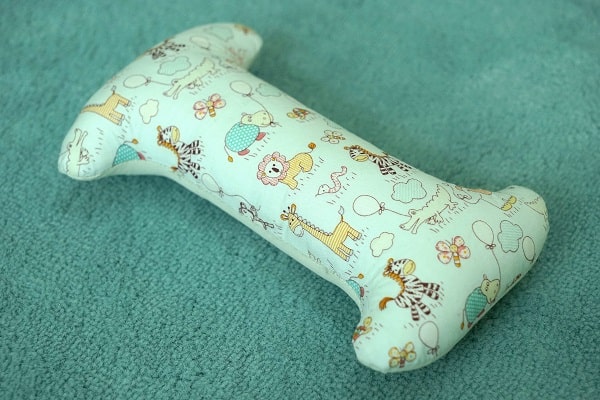 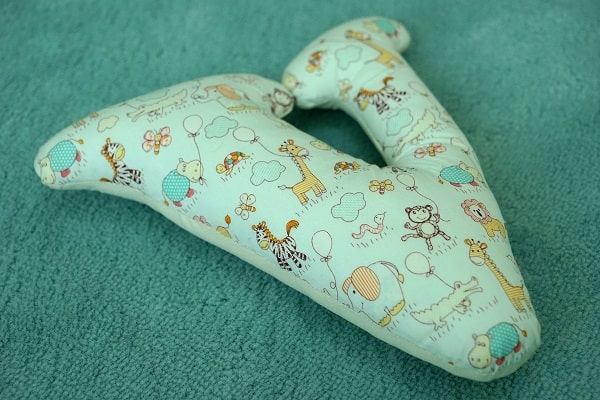 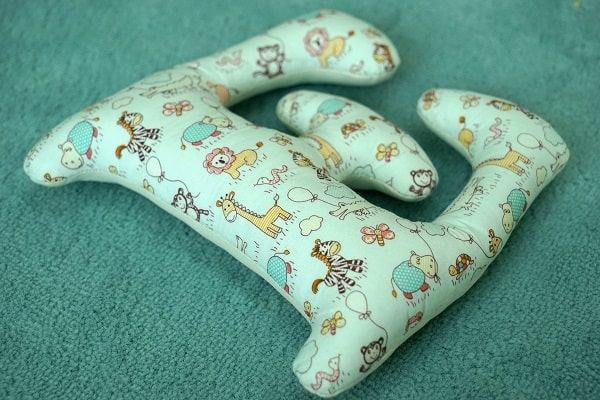 This is how my finished stuffed fabric letters look on the wall shelf.

And here's my son playing with one of the letters. ♡

Guess which letter was he holding against the camera?

This project remains one of my favourite. The fabric element really softened the baby room. Granted, I was getting tired of the project by the time I reached the letter "E" (that was also the letter when things started to get seriously difficult!), thanks to hand-sewing. I was also quite frustrated with the wonky letters "V" and "E", among other things, which I tried so hard to fix, but by now have embraced as imperfections that made the project look all the more homely and unique.

I hope you enjoy your stuffed fabric letters as much as I do!